Some weeks ago, a ‘blasphemous’ provocation against the ‘values of Hellenism’ took place in a Greek military camp.  An official prohibited several soldiers to sing the ‘Famous Macedonia’ (Makedonia Ksakousti), a military march that celebrates the Greekness of Macedonia, a deviant act resulted in a hysterical public outcry. The song is commonly considered as the national anthem of (Greek) Macedonia and is present over and over again in anniversary marches, military camps, but also in state institutions with an educational role, such as schools.  I can recount for instance our teacher of “Religion” in high school making us sing the song “as loud as we can” after the end of his class, with him as a self-appointed conductor waving a wooden stick trying to instill passion and militancy in the choir. The song had to be performed by the fifteen year old students as its g(l)oriness demanded; with a proud, determined and clear voice that gives the sense of unity and coherence to both the performing subjects and their enemies. The song, written after the Balkan wars and the annexation of Thessaloniki to the Greek state in 1912, stresses that freedom for the territory of Macedonia equals Greekness:

Famous Macedonia
the land of Alexander
you drove away the barbarians,
and now you are free!

You are and you’ll be Greek,
the very glory of Greeks,
and we will be looking
you with pride again!

Macedonians cannot
live enslaved,
even if they lose everything,
they still have their Freedom!

In the flaring reactions against the formation of a nation-state under the name of ‘Macedonia’ after the disintegration of Yugoslavia during the 1990’s, ‘Famous Macedonia’ has been one of the main affective devices mobilized in the effort to secure the ‘sacredness of the Greek past’. These reactions culminated in massive protests organized by the mayor of Thessaloniki and other city officials marking the beginning of an enormous mobilization to consolidate an identity among the Thessalonikians grounded on the ‘uncontested Greekness of Macedonia’.  In the days of the protests, schools and other public institutions were closed so as to involve both students and teachers in this ‘new struggle of Hellenism’. The rationale of this ‘national resurrection’ has been set in the first of these big protests in 1992 by the then mayor of Thessaloniki, Dinos Kosmopoulos, who bellowing in front of a transported crowd sets the basic line of this new struggle: “….the past, this past is sacred, more sacred than our own land, more sacred than our own lives”[i]. 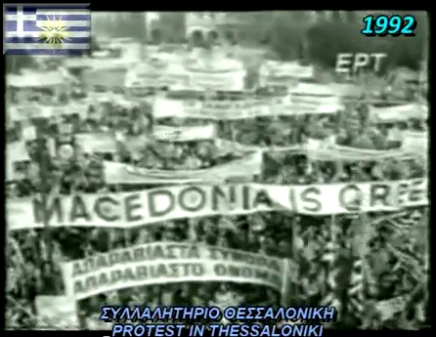 The discourse of the ‘uncontested Greekness of Macedonia’ purports to constitute some sort of embodied knowledge, a non-negotiated, naturalized and taken for granted reality, where its questioning almost immediately excludes skeptical subjects  from the ‘national community’.  The agents of questioning are necessarily related with suspicious identities attributed with ‘malicious’ intentions within the Greek public sphere: American agents, conspirators of the New World Order, Turks, Slavs, communists, traitors, Albanians, gays, and generally whoever can constitute a threat to the masculinized and ethnically ‘pure’ national body.

The naturalized character of the uncontested Greekness of Macedonia is most evidently manifested in the most embodied institution of all: language.  While all the other people in the world use the word ‘Macedonia’ in their everyday conversations to describe the Balkan country to the north of Greece, Greek citizens use either the name of its capital Skopje or the more technical term F.Y.R.O.M. to refer to it.

The slogan above “Macedonia is Greece” along with the ‘Vergina sun’ in a building in central Thessaloniki, vandalized with red paint. Above the line reads: “National unity is painted with blood”.

In a TV interview in 2007 when a Greek student was asked how he felt about the claims of Macedonians to self-determination, he answered: “It is as if you are taught that the blue colour is ‘blue’ and then someone comes up to you and tells you, no it is not blue it is red”[ii]. Pierre Bourdieu offers the term doxa in order to describe such a “constructed vision of ‘reality’ so naturalized that it appears to be the only vision of reality”[iii]. As the doxa of a particular community constitutes a self-evident category, it becomes apparent only when it is questioned, when an antagonistic discourse challenges it. Bourdieu calls an antagonistic claim that carries a different perspective for looking at a particular discourse against the established doxa, blasphemy or heresy. The agents of the right doxa then, Orthodoxy as Bourdieu calls it, furious that their established ideas about the world are questioned, come to disdain the claim of the blasphemous and reconstitute the new infallibility of doxa. Blasphemy creates a doubtful rupture that needs to be recovered and the blasphemous are ridiculed, caricatured, scorned and generally positioned outside the ‘natural’. The right doxa has to be repeatedly performed so as to cover the doubt and to patch up the rupture that the blasphemous initiate.

The singing of ‘Famous Macedonia’ “as loud as we can” in the Greek army constitutes such a ‘corrective performance’.  When this performance is challenged the right doxa has to urgently re-patch it, by pinpointing the ‘absurdity’ of its cancelation. For example, in reviewing the aforementioned event that took place in the Greek army, a journalist named Velissarios Dragatsis describes how a sergeant in a military camp in northern Greece ordered the conscripts to march while simultaneously singing ‘Famous Macedonia’[iv]. The conscripts according to him not only followed his orders, but were marching and singing so passionately that their “yells could be heard at a big radius around the camp”. However, this idyllic atmosphere was suddenly interrupted by an unexpected event:

“All of a sudden”, Dragatsis writes, “the official of the division appeared running. He looked at the conscripts and whistled three times. They continued their training and stopped only when the official arrived almost shouting at them to immediately stop the military march.”

The author confronts the readers with a blasphemous official who penetrated into the naturalness of the scene in order to set his own ruling. He is running, whistling, shouting and generally making a big fuss about an otherwise normative event. His convulsion against the naturalness that was smoothly unfolding before our eyes makes him seem like a frenzied lunatic. Dragatsis with a sense of wonder and disdain against the unfamiliar event, cites that such “bizarre events destroy the moral values of the military forces and constitute a bad precursor to the evolution of issues of a national kind[…]”.

The ‘normal’ reality, however, eventually prevails over madness. Indeed, in the end, following orders from the provisional Minister of Defence Fragkos Frakoulis and the GES (Hellenic Army General Stuff) a committee will proceed in an investigation in order to “punish those that have caused a stir or are responsible for the incident”. Titling his article “A military official forbids the march ‘Famous Macedonia!’” , Dragatsis adds the exclamation mark so as to demonstrate his astonishment that such a worrying deviation from the natural took place.

In another article on the same incident, which appeared in the blog taxalia.blogspot.com – that comes under the eloquent title ‘sleepless eye over Salonika’-, the official this time is not only an absurd, lunatic figure, but also a fascist for prohibiting the song. The article goes under the title: “A fascist official prohibited the ‘Famous  Macedonia’ from a military camp!”   (adding again an exclamation mark in the end in order to demonstrate his astonishment towards the curious event)[v]. This time the author begins before describing what happened, by recommending the suitable punishment for the wayward official: “He should immediately be withdrawn from the military, as all Nazi officials”. He then goes on: “An ethno-nihilist, fascist military officer who is apparently an admirer of the Nazi-collaborators Skopjans, prohibited the hymn to freedom of Macedonia”. The argument of being a fascist for prohibiting the song implies that singing ‘Famous Macedonia’ is a kind of spontaneous expression on behalf of the soldiers that comes to be repressed, as if it is not imposed on them by the military institution. All the so called ‘Skopjans’ here appear to be timeless Nazi-collaborators, and whoever insults in any way the ‘Greekness of Macedonia’ is a Nazi-collaborator too.

To reinforce his claim that the ‘Skopjans have been and still are Nazis’, the author includes two photographs in his text. The first one goes under the clumsy title “FYROM collaborated with the Nazis”, although anyone with some basic historical knowledge understands that FYROM could not have collaborated with Nazis for the simple reason that FYROM did not exist as a state back then. The second one shows an arbitrarily included swastika carved in marble without any further information. The author here in a rather impatient way aims to create the impression of an almost inherently ‘polluted’ nation that threatens to contaminate ours. Finally, as the agent of logic, the Greek Minister of Defence is cited in this article as well, as ordering an investigation surrounding the outrageous event so as to punish the ones responsible for the prohibition.

In a similar fashion, the discourse of the ‘uncontestable Greekness of Macedonia’ has been brought forward recently by commentators and members of the public in the context of the June 16th elections so as to question the truthfulness of the left wing party Syriza’s intentions to ‘save the country’. Since Syriza is defending the Macedonian minority in Greece and the right for Macedonian self-determination, its legitimacy as a political party is questioned. In numerous blogs, reports and everyday conversations, Syriza was delegitimized by being called ‘agent of the New World Order’, masons, anti-Christians, ethno- traitors, dangerous and profane. As the common saying had it: “Had Syriza been more ‘responsible’ towards the Macedonian issue it would have definitely won the elections”. For the agents of the ‘right doxa’ Syriza is positioned itself against “what goes without saying”[vi]. This discursive device not only directs attention to the ‘disrespectfulness’ of Syriza against perceived ‘reality’, but it also makes an effort to reconstruct its doxa anew in the face of Syriza’s ‘unpatriotism’. 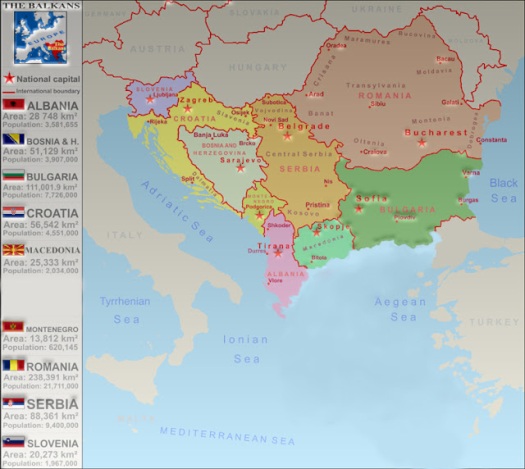 According to the Greek cooperative Metexnio this is the ‘notorious’ map in which the young Skopjans are taught in their schools. Metexnio over-identifies with the nationalist normalizing discourse exposing its fearful character.

‘Corrective performances’, however, as of course any form of cultural production, never transmit sings univocally and can have both intentional and unintentional destabilizing effects in relation to the doxa of their own narrative. In publishing the above map, the Greek artistic-prankster cooperative Metexnio[vii] intentionally performs the enemy as a grotesque caricature positioned against “what goes without saying”, here the commonly accepted geographical distribution of nation-states. By ‘revealing’ the conspiracy to eliminate the whole Greek territory in a map taught in ‘Skopjan’ history classes and thus positioning the ‘impossible’ in the in the realm of the possible, Metexnio performs the nationalist language of fear that constructs an all-mighty Other and a constant victimization of one’s own self. While the nation keeps incessantly singing the national anthems “as loud as it can” so as to scare off the ‘enemies’ and reaffirm its discourse, the ‘enemies’ simply erase it from the map altogether. The fear becomes almost real in the face of a nation that constantly machinates to rip us off our enjoyment, in this case by altogether doing away with our ‘holy’ land. The performance of symbolically erasing a nation-state from institutional geographical maps offers another type of enjoyment; that of momentary suspension of the fixity of naturalized identities.